THE STORY OF COVELLI ENTERPRISES 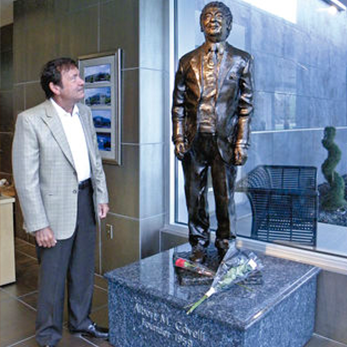 Instead, the Covelli family moved to Panera Bread franchises and is now the largest franchisee of the brand with over 300 locations in 8 states. The company also owns O ’Charley’s Restaurants and Dairy Queens. Most recently, Covelli opened its first Oath Pizza on the Ohio Turnpike in 2020. Covelli Enterprises ranks in the top ten for largest restaurant franchisees in the country.

While the food offerings at these four restaurants are all different, the basic operating premise at all of them is the same: treat customers and employees with total dignity and respect. Albert Covelli, who passed away in 2014, set high standards for his son, Sam, who leads the company today. Sam and Albert Covelli spent decades working together and grew Covelli Enterprises into one of the nation’s most respected, philanthropic, and well-run restaurant-focused companies in the country.

The late Albert Covelli, who was a native of Kenosha, Wisconsin, launched an open-air market just after returning home from his time in the military during World War II. Soon after, he expanded to three locations and added a produce company. It didn’t take long for him to begin selling to big customers, including Ray Kroc, the founder of McDonald’s fast food restaurants. Kroc and Covelli shared the same vision regarding the need for quality and top-notch service. Soon after Covelli opened the first McDonald’s Restaurant in Warren, Ohio, where Covelli Enterprises is headquartered today. Sam and Albert Covelli eventually climbed the “golden arches” to own 50 McDonald’s Restaurants in Ohio and Pennsylvania.

Sam Covelli, who still remembers how to make all regular items on the McDonald’s menu, said he still calls on what he learned back in the early days of working as a restaurant crew member. “I learned that all people must be treated with respect and dignity and that we as the restaurant owners have to remember that employees and customers have choices. We always must be grateful that they’ve chosen us.” For Sam, nothing matters more than seeing his customers and employees smile.

Sam and his wife, Caryn, have three children Candace, Albert II, and Danielle, who all currently work within the company in various markets.