When A Special Wish Foundation Dayton told Emma Becker that they’d like to give her and her family a vacation trip to anywhere she wanted to go, Emma thanked them but said she wasn’t ready. 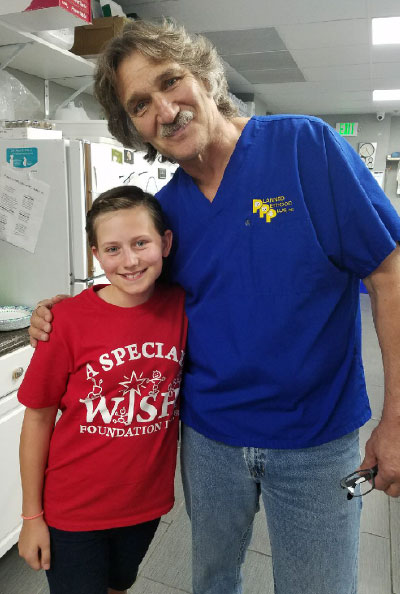 Emma, 7, at the time, had just been diagnosed with cancer and she didn’t feel like celebrating. In early 2017, after finishing her two and a half year cancer treatment in February 2016, she was ready to plan a trip.

Unlike most of the other 1,700 trips that A Special Wish Foundation Dayton has arranged for children with life-threatening illnesses and their families, Emma didn’t want to go to Disneyworld.

Emma’s mother, Caroline Becker, said Emma didn’t want to meet Dr. Jeff because he is a celebrity, but she wanted to meet him because of the great work that he does for so many animals in need and because he, himself, is also a cancer survivor.

Caroline and Emma’s father, Mark, accompanied her in July 2017 to Denver. Caroline Becker said it was a deeply meaningful and inspiring experience. Emma plans to be a vet; and Caroline and Mark said they were humbled by how the trip happened.

A Special Wish Foundation Covelli Enterprises/Panera Bread to cover all costs associated with the trip.

“When Emma heard that Panera Bread was sponsoring the entire trip, Emma asked, ‘Is it because we go there all of the time? And because it’s my favorite place to eat?’” Caroline Becker said.

“I explained to her, ‘Panera Bread heard your story and wanted to be a part of something special for you.’ It is completely humbling for us. “

David Seyer, executive director of A Special Wish Foundation Dayton, said the organization’s intent is to give children and their families the gift of hope by granting a child’s wish.

Covelli Enterpirses and its Panera Bread restaurants in the Dayton area have been partnering with A Special Wish Foundation Dayton for three years and have provided funding for three wish trips for children and their families.

Sam Covelli, owner and CEO of Covelli Enterprises, said he is honored to be playing a small role in bringing joy to children who face such challenges. “We are so grateful to A Special Wish Foundation for the great work they do and are deeply grateful for the opportunity to contribute,” Covelli said.

Seyer said Covelli and Panera are critical for the organization.  “The kids – what they see is the place where they go to grab a Danish or a bowl of soup is giving back to the community. They’re seeing how Panera is not some big national conglomerate. That doesn’t care,” Seyer said. “What Panera and Covelli really care about is the they communities where they are operating.”

Seyer said that Panera and Covelli’s involvement with Special Wish Foundation Dayton is not for the recognition. “They want to make a difference for the communities that support them. They care about these kids who are facing such paramount challenges through no fault of their own,” Seyer said.

How far we’ve come with just a simple cookie…