Ohio-based Covelli Enterprises – the largest franchisee of Panera Bread including nearly 100 stores across Dayton, Cincinnati, and Central Ohio – announced this week a critical donation to The Foodbank in Dayton of 35,000 bottles of water in the aftermath of the storms that devastated parts of Dayton and the surrounding communities late Monday night. The donation will be used by The Foodbank as part of the on-going tornado relief efforts and as the water supply in many areas remains in a fragile state.

“The response to tornado relief efforts has been incredible,” said Lora Davenport, Advocacy & Programs Manager at The Foodbank. “Covelli Enterprises and Panera Bread quickly stepped up and took action to make sure our neighbors affected by this disaster have drinkable water on hand. The Foodbank is thankful for their continued support.”

“Our hearts are beyond heavy after seeing the damage that occurred this week in our Dayton-area communities. The homes destroyed are those of our neighbors, friends, and employees,” said Sam Covelli, Owner and Operator of Covelli Enterprises. “We are so deeply saddened, but we are committed to doing all we can to help restore the light that makes this community shine so bright. Our hope is that we can encourage every partner we have in the region to get involved in some way and inspire other businesses to do the same. Now is the time to unite behind this effort.” 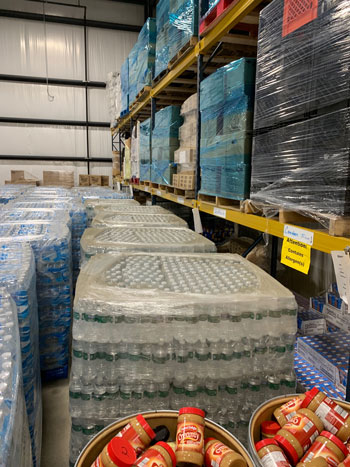 The City of Dayton and much of the surrounding areas have been under boil advisories for days after thousands of homes lost water service as a result of the storms. Davenport emphasized that even as boil advisories are lifted in areas, the vast need for water continues. The Foodbank, which has already exhausted much of its bottled water supply, will continue to serve homes and facilities left without running water and will maintain a special focus on providing food and water to the displaced families whose homes were destroyed. The water will also be used in areas where the boil advisories are still in effect and will be used for the teams of volunteers and first responders who will continue the clean-up and recovery efforts in the coming weeks.

The massive water donation is a result of the Covelli Enterprises’ partnership with Absopure, its water supplier based in Plymouth, Michigan. The company also leveraged partnerships with Pink Ribbon Girls and United Building Materials to ensure the fastest delivery possible to The Foodbank where it will be distributed to the areas of greatest need. The donation was delivered Friday morning and was received by volunteers from The Foodbank, Pink Ribbon Girls, and Covelli Enterprises/Panera Bread.

Covelli Enterprises is committed to doing everything it can to assist the people of Dayton during this time of need.