Little did we realize when we signed on as an official sponsor of the Cincinnati Reds earlier this year that the team would align so strategically with our April “Pieces of Hope” for Autism cookie campaign in the Cincinnati / Northern Kentucky market.

This would be the first year for “Pieces of Hope” in the Cincinnati/Northern Kentucky market. A campaign near and dear to my heart, the Covelli franchise has raised nearly $1.2 million dollars throughout our various markets since 2010 with this annual weeklong campaign where Panera Bread bakery-cafes sell a Puzzle Piece Shortbread Cookie and donate 100% of sales back to a designated autism charity in each market.

Upon purchasing the Cincinnati market a year ago (in April of 2016, to be exact), we quickly learned that not only does the city have a world-renown children’s hospital with an amazing autism research and intervention facility, but that The Queen City sure does love baseball!

If you know anything about Cincinnati, you know Reds’ Opening Day is an unofficial holiday in that town! People take off work, and even pull their children out of school for a daylong celebration that includes the Reds Findlay Market Parade, and culminates with an official kickoff to the baseball season with the Reds season opener. Not only was the first week in April Cincinnati Reds Opening Week this year, but it was also Panera’s “Pieces of Hope” for Autism campaign. To be exact, our cookie campaign kicked off on Reds Opening Day in Cincinnati! 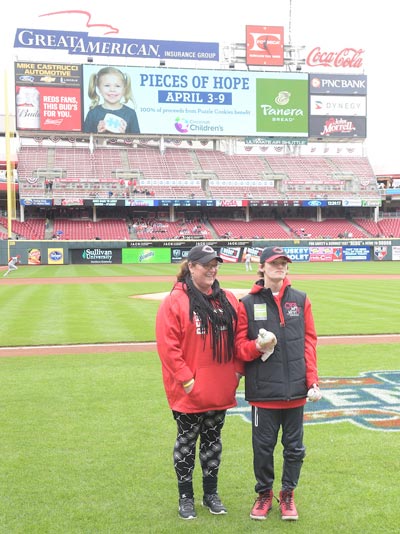 Jenn Jordan and son Jakob pose for a photo during their opportunity to deliver the game ball to the mound after the ceremony.

A longtime supporter of Cincinnati Children’s Hospital, the Reds were more than willing to help spread the word about “Pieces of Hope” during their celebratory opening week of festivities this year. Not only did the stadium feature large video-boards of the Panera campaign during all three games the week of our autism promotion, but invited members of Team Panera Cincinnati and Cincinnati Children’s Hospital to take part in a pre-game ceremony on Thursday, April 6th in advance of the first Business Man’s Special game of the year against the Philadelphia Phillies to celebrate the campaign. And, making that opportunity even more relevant was the opportunity for Q102 FM’s morning deejay, Jenn Jordan’s son, Jakob, to deliver the game ball to the mound. Q102 often partners with Panera in Cincinnati to celebrate various promotions and events. And, Jenn’s son Jakob has been a patient of the Cincinnati Children’s Hospital’s Kelly O’Leary Center for Autism Spectrum Disorders since he was a toddler. What an excellent opportunity to bring us all together to generate awareness for autism in Cincinnati!

“When presented with this opportunity through Panera to have Jakob deliver the Reds game ball, I wasn’t sure if he would be willing to miss school to do it, “ said Jenn Jordan. “But, he was really excited, and did a fantastic job out there! I’m one proud mama! And, I’m so thankful to be a part of such an amazing town that rallies around causes like this that impact so many families.”

It’s for kids like Jakob, and the thousands and thousands of others with an autism diagnosis in the markets we serve throughout the states of Ohio, Kentucky, The Carolinas, Florida and beyond that we do what we do here at Covelli.

It’s for those special moms, dads and caregivers who are their children’s’ full-time advocates.

And, it’s for the tireless effort of so many doctors, nurses and intervention specialists at amazing facilities like Cincinnati Children’s Kelly O’Leary Center for Autism Spectrum Disorders.

So, thank you, Cincinnati Reds, for the opportunity to showcase our Puzzle Piece Cookie to your amazing city! Thank you, Cincinnati Children’s Hospital Medical Center, for allowing us to serve you during this inaugural year of our “Pieces of Hope” campaign in Cincinnati. And, thank you Q102, for sharing your Jenn Jordan and her amazing son Jakob with us. You all are the reason we do what we do day in and day out in hundreds of bakery-cafes across the United States. Thank you.

Franchisee of the Year