Executive Director Shares Her Story About Why She Leads the Organization

“We must let go of the life we have planned so that we can accept the one that is waiting for us.”

Tish and Dave Bartlett received the news in November 2007: Their son, Garrett, who was 3 1/2 at the time, was diagnosed with an autism spectrum disorder. 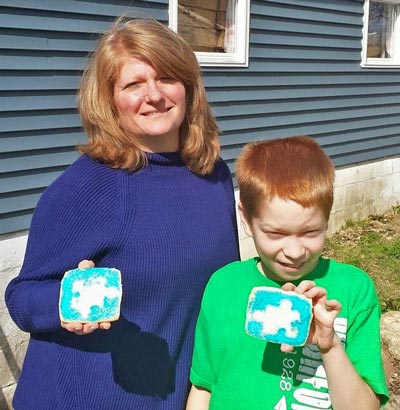 Neither Tish nor Dave truly understood what this diagnosis really meant. Tish was working full-time as an administrator at a law firm and Dave was working as a HVAC-R Industrial Service Technician. They were a young married couple with an 8 year-old neuro-typical son, Kameron. The small family had to learn how to embrace the challenges autism brought to their lives. The family chose to dedicate countless hours to encouraging and helping Garrett be the most success person possible. As a family, they extended this dedication in supporting other families through the Autism Society NWPA.

When the diagnosis came, the couple found the Autism Society Northwestern Pennsylvania and began attending a few support group meetings. A year after Garrett’s diagnosis, Tish resigned from her job to spend time learning all that she could about autism and to be in a position to help Garrett.

In August 2009, a group of the couple’s friends, who realized how much the Autism Society Northwestern Pennsylvania meant to the Bartlett family and others, hosted a fundraiser for the organization.

The event, which was called Autism Farm Fest, strengthened the family’s connection to the Autism Society Northwestern Pennsylvania and when the organization was experiencing a transition, leaders asked Tish if she would serve as the group’s part-time Outreach Coordinator.

Garrett was starting Kindergarten when Tish received the offer and she accepted.

“As a parent that experienced the mysterious of autism, I knew the Autism Society NWPA was the perfect match to provide a safe supportive community for families newly diagnosed as well as throughout their lifespan,” she said.

She said her experience as a parent of “an amazing son on the spectrum” has provided her with the drive to work tirelessly to increase awareness of autism and offer support to individuals and families in the local community.

3 years after starting as the Outreach Coordinator, she was promoted to the organization’s Executive Director, where she continues striving to increase support, awareness and education about autism in her community.

“As a local organization, we are in the trenches with our families providing supports, referrals, mentors, education, and most importantly a community of understanding,” Tish said.

Autism Society NWPA is also committed to research about the disorder. In 2016, the organization provided a grant to Dr. Nancy Minshew of CeFAR (Center of Excellence in Autism Research) at the University of Pittsburgh Medical Center.  The funding will support Evidence-Based Cognitive Rehabilitation to Improve Functional Outcomes for Adults with Autism Spectrum Disorders.

While the number of children diagnosed continues to rise, there is also a dramatic increase in the number of adults with autism, Tish said.  In 2005, more than 1,400 Pennsylvania adults were living with an autism diagnosis.  That number is expected to increase to more than 36,000 by 2020. “As a community, we need to be understanding, accepting, and supportive in order to help our loved ones transition to adulthood,” Tish said.

“Our partnership with Panera Bread has been a blessing.”

Tish explains: “We depend 100% on fundraising dollars and community support in order to meet our mission goals.  All four Erie Panera Bread locations accomplish a great feat in bringing autism awareness to our community through their “Pieces of Hope for Autism” cookie campaign.  The funds raised have enabled us to increase our opportunities for individuals and families.  The opportunities and clubs we offer provide individuals on the autism spectrum a venue to practice their social skills, communication and social interactions.  Supporting the Panera Bread campaign allows us to continue these clubs.”

Knights of the Round Table Hold Court at Gahanna Panera Bread

Franchisee of the Year
Scroll to top